In an unprecedented election year, first-time poll workers are awarded the 2020 Joseph H. Kanter “Citizen of the Year Award” from NCoC for stepping up in their communities and inspiring a new generation of civic leaders.

December 3rd, 2020 – WASHINGTON, D.C. – The 2020 election was the most participatory election in our country’s history. Even amid the challenges of a global pandemic, local leaders creatively adapted their strategies and doubled down on their commitment to ensure all eligible voters had access to the voting process. 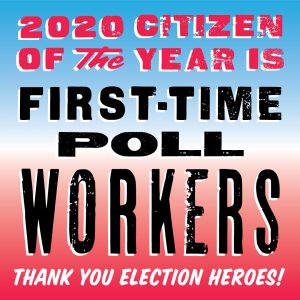 Named in honor of NCoC’s long-time chairman, the Joseph H. Kanter Citizen of the Year Award recognizes the extraordinary contributions of private citizens in furthering the cause of civic engagement and democratic practice. Normally given to an individual, this year’s award will be given to all first-time poll workers for their incredible leadership during the 2020 election.

The award will be presented at “Celebrating Our Stars” Awards Ceremony held by the Students Learn Students Vote Coalition (SLSV) to recognize the extraordinary efforts of organizations, campuses, and local leaders throughout the 2020 election cycle.

To receive the award, several first-time poll workers from across the country will be recognized at the virtual Awards Ceremony. The poll workers include:

Varun Rajaram is a student at UT-Austin ran his own polling place, staffed by students he had recruited, and was able to help a bunch of students get the right ID and come back to vote rather than being turned away!

Zarai Aquino served as a Campus Compact recruiter this summer at Lorain County Community College in Ohio, recruiting peers to serve as poll workers. She also served as a first-time poll worker herself.

Joshua Medley, a student leader with LeadMN in Minnesota, heard about the need for young people to work the polls through his college and on Instagram. He served as a poll worker in the primaries and in the general.

Varun, Zarai, and Joshua are just a few of the stories from thousands of first-time poll workers who supported their communities in the 2020 Election.

The recognition of first-time poll workers as Citizen of the Year builds upon the first-ever Election Hero Day (November 2nd, 2020) established by NCoC. This day recognizes the incredible work of local leaders to guide communities through an unprecedented election year.

NCoC will be broadcasting the virtual awards ceremony on their Facebook page on December 4th at 6:00pm ET. You can access the live feed when available here.

NCoC, the Students Learn Students Vote Coalition, and our partners express our gratitude to first-time poll workers for stepping up in their communities. After the first-ever Election Hero Day on November 2nd, the recognition of first-time poll workers of Citizen of the Year recognizes the importance of getting involved locally to ensure safe and secure elections.