In Review: 2019 Annual Conference on Citizenship

For the 74th  Annual Conference on Citizenship joined University of Maryland School of Public Policy in co-hosting this convening focused on highlighting “bright spots” or local leaders committed to full participation across America. As we approach the 2020 Census and Elections, this work is critical.

Click here to check out photos from attendees at the event.

After World War II, Congress worried that Americans would struggle to adapt the meaning of citizenship for a postwar society. Leaders worried that without the existential threat of war, Americans might forget why the full participation of each and every person was necessary to the American project. When President Eisenhower chartered the National Conference on Citizenship in 1953, he had no idea how much we would forget as a culture.

At NCoC, we know it all starts with being an engaged citizen in your community.  The 2019 event elevated those “bright spots” or local leaders committed to full participation. Over 50 speakers, facilitators, and discussion leaders led the convening engaging 275+ leaders representing local communities, non-profits, educational institutions, government agencies, foundations and corporations.

The event focused on voting rights, voters’ participation, 2020 Census, and more. It also featured the 2019 Civvy’s and 2019 Bridge Alliance Summit.

2019 Joseph H. Kanter Citizen of the Year Citizen of the Year Award – Desmond Meade, President of the Florida Rights Restoration Coalition.  In 2018, Desmond and his team helped lead a movement that successfully passed Amendment 4, a grassroots citizen’s initiative which restored voting rights to over 1.4 million Floridians with past felony convictions. This was the single largest expansion of voting rights in the United States in half a century, and brought an end to 150 years of a Jim Crow-era law in Florida. 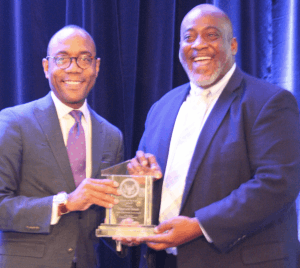 Major George A. Smith Memorial Fund’s 2019 HOOAH Award – Michael Washington, Seattle Firefighter and Marine Corps Veteran.  Mike is a 30-year veteran of the Seattle Fire Department, and a veteran from the Marine Corps. Today, his mission is to assist veterans and First Responders to identify, understand, and react to the forces of stress as a means to combating the forces of PTSD and suicide. 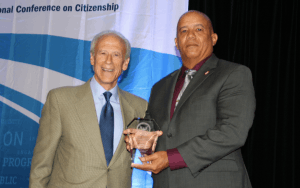