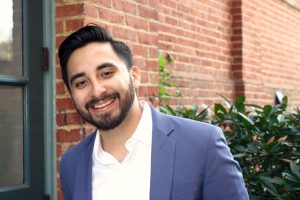 Eddy Zerbe is the Special Projects Director for the Students Learn Students Vote Coalition. In this role, he manages several of the coalition’s national initiatives including +1 the Polls, National Voter Registration Day’s Campus Takeover, and VoteTogether’s Party at the Polls.
Prior to joining the SLSV Coalition, Eddy was active in non-partisan civic engagement organizations from the local to the national level. Most recently, Eddy was the Director of RISE to Vote, a program that partners with college and professional sports teams, leagues, and athletes to improve civic engagement in our country.
Eddy has also worked for the Funders’ Committee for Civic Participation and Lawyers’ Committee for Civil Rights. In Texas, he was a co-founder of MOVE Texas and worked in the office of State Representative Ruth Jones McClendon. Eddy was born in Monterrey, Mexico and raised in San Antonio, Texas. He graduated from the University of Texas at San Antonio.