The previous section examined how the pandemic has affected the lives and livelihoods of people across the country. The next section moves on from the “damage assessment” to track measures that will be important for recovery from the Covid crisis.

This Prosperity section examines measures of high functioning governments and civic institutions that are essential for community well being and prosperity. Importantly, this section ends with metrics that assess how people are doing during the pandemic.

Governments–local, state, and federal–are being asked to do a lot during the Covid crisis. We start with metrics that assess how states are performing relative to White House reopening guidelines, available data on Covid-related funding to states, the projected tax revenues states will need for their myriad public functions, challenges the pandemic presents for counting all residents for the 2020 Census, and preparedness for the upcoming presidential election. For each indicator, we provide a brief, evidence-based set of findings and implications to help readers quickly grasp a top-level overview of how each state is doing.

Indicators in this section 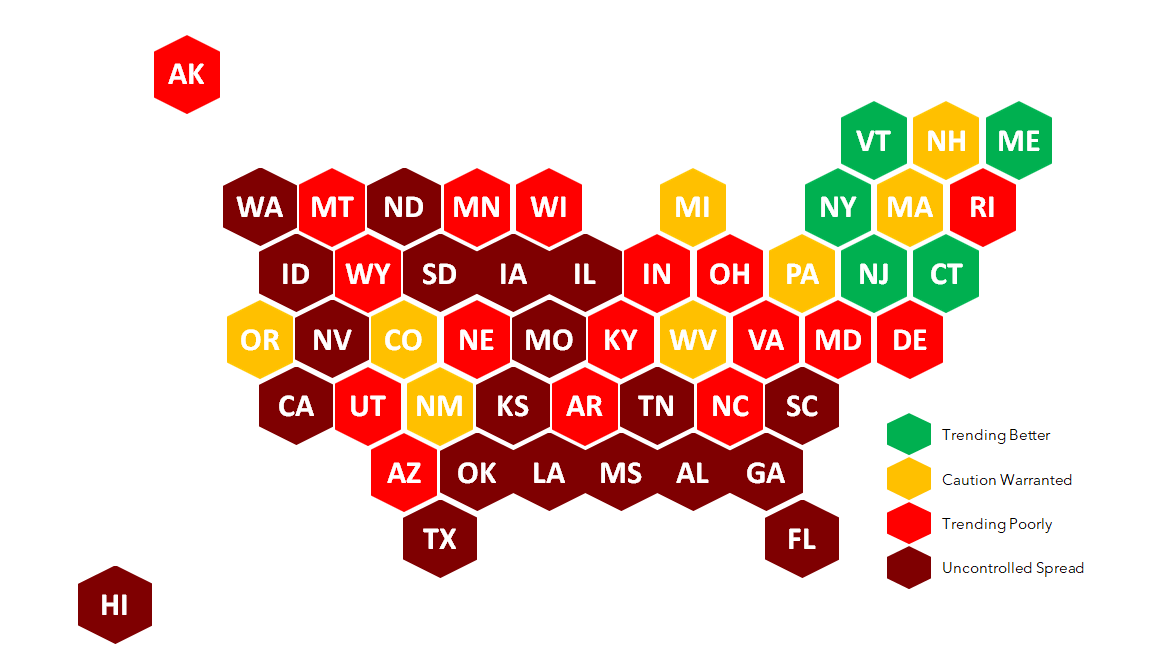 Source: Covidexitstrategy.org
Note: WA is reporting no data because of data reporting issues dating back to Aug 1.1

The White House Opening Up America Guidelines set criteria for reopening based on trajectory of new cases, hospital capacity, and degree of testing.2 Challenges with quality and availability of data on deaths, number of people in ICUs, tests conducted, contact tracers hired, and more continue to be a theme in the pandemic.3 The problem exists at all levels (national, state, and local) and is making it harder to assess how states are doing relative to the White House gating criteria. As of August 20, 5 states (all in the northeast) are meeting these minimal criteria. Meanwhile 20 are categorized as having “uncontrolled spread” – up 1 from last month.

Though the guidelines are federal, the responsibility for public health programs and policies to support safe reopening falls to state and local governments. Policy tracking initiatives from the National Governors Association and National League of Cities reveal a wide range of policies on masks, gatherings, business reopenings, and reopenings of public services such as libraries, schools, and childcare centers.4,5 Ultimately, though, much of the power to contain the spread lies with individual choices. In the absence of a vaccine or effective treatment, public health measures such as social distancing, wearing masks, and widespread testing are essential for managing the pandemic.

As of early August, half of Americans now know somebody who has been infected by the virus – and that number holds steady across all geographic regions, so it is becoming harder to view Covid as another community’s problem.6 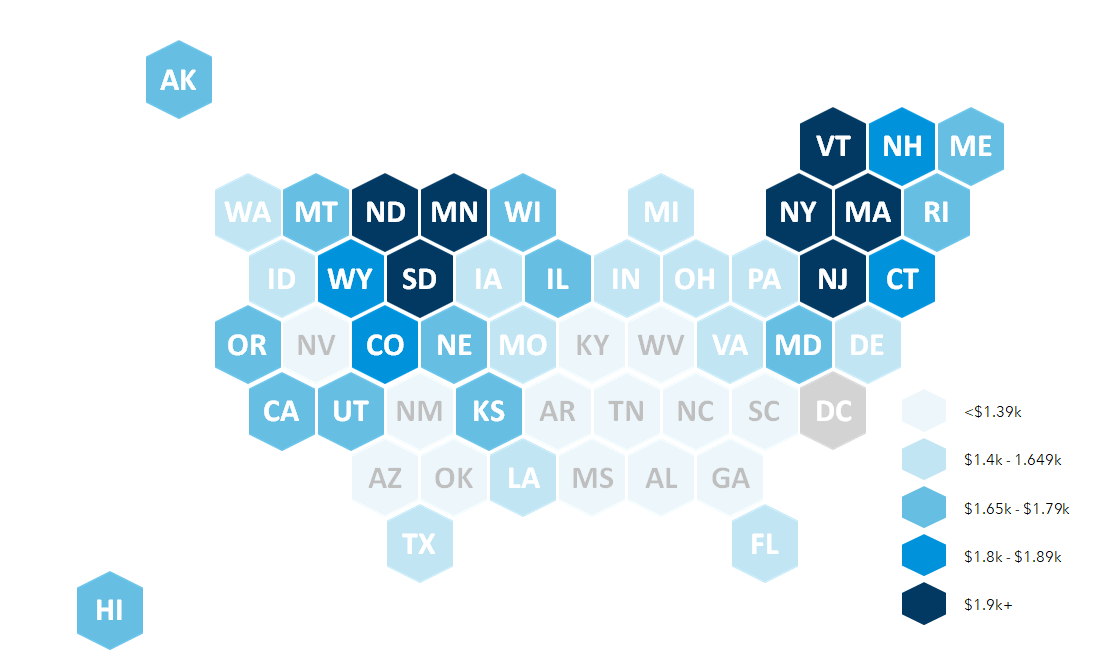 In early July, the SBA released the names of all companies and organizations that had received loans of $150,000 or more. News reports highlighted those larger recipients that are already well-capitalized and therefore not the intended target of the program.2,3 The public backlash following these news reports may have dampened demand for the loans. Concerns about repayment terms may also have contributed to reduced demand in the final weeks of the program.4

Nonetheless, USAFacts’ analysis of PPP dollars per capita compared with job losses from January to June per capita revealed that states with greater economic hardship did receive a greater share of the PPP dollars relative to their population size.5 Regardless, as of August 1, the U.S. had 16% fewer small businesses open than in January 2020 according to the Opportunity Insights Economic Tracker at Harvard.6

At least 10 states are projecting tax revenue reductions of 10% or greater for the fiscal year 2020, increasing to at least 32 states for FY 2021.

FY 2020 and 2021 preliminary estimates of decline in tax revenues by state, as of August 12

Note: Some states do not have published projections for both or either years
Source: Center on Budget and Policy Priorities

The economic crisis spurred by Covid hits states directly, in terms of reduced income and sales tax revenues. The disparate impacts of the pandemic on industries such as tourism and oil & gas hit states’ finances as well. Hardest hit in fiscal year 2020 were New York and Michigan, with an 15% and 13% reduction respectively, due in large part to unemployment and reduced production.1,2

This revenue loss will have an impact on the essential services states provide such as education, disaster preparedness and response, public spaces, and transportation.7 More troubling is the impact these reductions could have on the state’s ability to mount a robust public health response to Covid.8 For example, recent NPR survey of states found that only 3 states plus D.C. are appropriately staffed for contact tracing.9

With a looming deadline of September 30, more than half of households yet to be counted in the 2020 Census are in active Covid hotspots.

Note: Counties with ≥100 cases/100k people in the past week are classified as “hotspots” for this analysis. Blank counties on the map have Covid rates below threshold.

The timing of this pandemic was unfortunate for the constitutionally-mandated census of all persons every ten years. The census asks about all persons living in each household in the U.S. on April 1, 2020–a date that fell just as Covid consumed the nation’s news cycles. This census was already expected to be a difficult one, with record-high levels of distrust in government, digital divide issues, and concerns that misinformation might depress response rates.1 But, a Bureau staffer recently described the pandemic as the “most significant challenge to the quality of 2020 Census data.”2

With a 20 percentage point spread between the highest (ID) and lowest (NM) state total response rates, closing the gap through door-to-door operations will be essential.3 But door-knocking in pandemic hotspots raises many concerns, such as people not opening their doors, census-takers feeling unsafe, and fears of “travel teams” spreading the virus between communities. Using the Bureau’s latest state-level data on total response rates (including self-response and field operations), 20M+ households remain to be counted in states that are classified as active pandemic hotspots (case rates above 100 weekly new cases per 100k people).3 In the less than 6 weeks remaining, state and local governments and community organizations can still reduce the number of needed in-person visits by encouraging residents to respond by phone, mail, or online.

In 9 states, more than 50% of registered voters who didn’t vote in 2016 cited structural reasons for not voting. The pandemic is likely to exacerbate those structural barriers.

Percent of registered voters who did not vote

The 2016 presidential election had a turnout rate of 60% for eligible voters.1 More than than 50% of registered voters in 9 states who didn’t vote in 2016 cited structural reasons such as polling place hours, accessibility challenges, registration problems, or not being near polls on voting day. With the 2020 presidential election likely to be taking place under pandemic conditions, it is instructive to consider recent structural barriers for not voting and how those might be exacerbated by Covid.

The most recent Current Population Survey asked why registered voters did not vote in that election. Their answers include a range of barriers that could dramatically reduce voter turnout during the pandemic, especially for states that have an extraordinarily high rate of infection (above 100 new cases in the last week per 100k population). For example, Mississippi, Missouri, Alabama, Louisiana, and Oklahoma are current hotspots for Covid-19 and have historically high structural barriers to voting. In 9 states, more than 50% of registered voters who didn’t vote in 2016 cited structural reasons.

For example, in 19 states, 10%+ of would-be voters indicated they did not go to the polls because they were ‘out of town or away from home,’ a reason likely to be exacerbated by Covid-related displacement. In 24 states, 15% or more of eligible voters did not go to polls because they were ‘too busy” and had “conflicting work or school schedules.” This November, with many families juggling work and children being at home due to school and childcare closures, finding time to leave the house to vote may be even more difficult. Concerns about using public transportation, long lines, and safety of polling places could cause large numbers of people not to turn out. Already, nearly half of registered voters believe it will be difficult to vote in November’s election (compared to only 15% in 2018).2

24 states and the District of Columbia are mostly ready for voting in a pandemic.

Readiness to vote by mail in a pandemic

Source: Voting by mail in a pandemic: A state-by-state scorecard, Brookings Institution

Primary and other elections this spring were marred by pandemic-related complications such as poll workers pulling out due to health concerns.1,2,3 In addition to safe and adequately staffed in-person voting, the CDC recommends that election officials “consider offering alternatives to in-person voting if allowed in the jurisdiction.”4 Fortunately, many jurisdictions already have experience providing alternatives to in-person voting, with mail-in ballots accounting for nearly 1 in 4 votes in the 2016 elections.5 Some jurisdictions had robust options for voting by mail in place before the pandemic, and some are making special accommodations.6 Brookings researchers designed a rubric for grading a state’s readiness for voting by mail in the pandemic.7 The rubric spans 14 criteria on requesting, completing, and submitting a mail-in ballot, with the focus on preparedness for the November election rather than permanent policies.8 Voting by mail reduces barriers to voting exacerbated by the pandemic such as transportation challenges, not being at usual place of residence, caregiving responsibilities, and difficulty getting to the polls during open hours. In the indicator on the previous page, Alabama, Louisiana, Mississippi, Missouri, and Indiana have among the largest shares of registered voters who cited structural barriers such as these for not voting in 2016. These states are also insufficiently prepared for voting from home.