Annual award from the National Conference on Citizenship given to Ken Harbaugh – former US Navy Pilot, Congressional candidate, past president of Team Rubicon Global, and co-founder of Mission Continues. 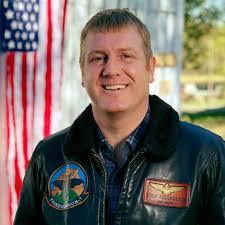 November 11, 2020 – In 2009, the Major George A. Smith Memorial Fund established the HOOAH Award at the National Conference on Citizenship (NCoC). As part of NCoC’s ongoing efforts to support and promote the importance of service in all its forms, this award is given annually to a veteran who defines citizenship through service to our country, both in uniform and beyond.

This year, NCoC announces that Ken Harbaugh is the 2020 Major George A. Smith HOOAH Award winner. As a former US Navy Pilot, Congressional candidate, past president of Team Rubicon Global, and co-founder of Mission Continues – Ken has been a steadfast community and veteran leader.

Currently, Ken is the host of the popular podcast – Rebuilding America: A National Service Podcast. In his this 10-part series, Ken talks with politicians, academics, and leaders about how national service can be used to bridge economic divides and heal cities. He’s also the host of the Burn the Boats – an ongoing podcast where Ken interviews leaders, activists, and politicians about current events and difficult decisions.

“Ken Harbaugh exemplifies the service and spirit the HOOAH Award honors,” said David B. Smith, chair of Major George A. Smith Memorial Fund and HOOAH Award Advisory Board. “He served honorably in uniform and continues to lead as a champion of service and engaging citizens in solving the most pressing challenges facing our communities and nation.”

On November 11th, 2020 (Veterans’ Day), Ken will be hosting a live-taping of his podcast with previous HOOAH Award winners, veteran-leaders Mike Washington and Becky Margiotta. Together, they’ll focus on how veterans are America’s greatest civic assets and can lead our communities through crises.

The HOOAH award is named in honor of Major (Ret.) George A. Smith who served his country for over 20 years as a career military officer. Eager to serve, Major Smith enlisted in the Army at the age of 17 and quickly rose through the ranks. Major Smith fulfilled his dream as part of the 82nd Airborne and later commanded the Ranger’s Alpha Company. He completed many tours overseas, including peacekeeping missions in Lebanon, Yemen, and Egypt. As part of the 7th infantry of Fort Ord, he served in Just Cause, a military operation in Panama. Following his career or service in the military, Major Smith continued to serve his community through leadership positions from the European Congress of American Parents, Teachers, and Students to disaster response work with FEMA. Upon his passing in January 2009, he was laid to rest in Arlington National Cemetery. The Major George A. Smith Memorial Fund was founded by his children Jennifer, David, Adam, and Chloe.

For inquiries on the HOOAH Award, or the National Conference on Citizenship, please contact Cameron Blossom at [email protected].

The National Conference on Citizenship (NCoC) is dedicated to strengthening civic life in America. We pursue our mission through a nationwide network of partners involved in a cutting-edge civic health initiative, our cross-sector conferences and engagement with a broad spectrum of individuals and organizations interested in utilizing civic engagement principles and practices to enhance their work.  Connecting people for the purpose of strengthening civic life is our goal.  At the core of our joint efforts is the belief that every person has the ability to help their community and country thrive. The National Conference on Citizenship is a nonprofit 501(c)(3) organization (“NCoC”). NCoC is strictly nonpartisan, and does not support or oppose any candidate or party.