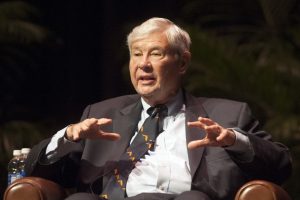 Daniel Robert “Bob” Graham has been a public servant for nearly four decades at the local, state and national level, and has become one of the most accomplished politicians in Florida’s history.

As first a state legislator, then governor and finally a three-term U.S. Senator, Senator Graham has had a role in nearly every major public policy issue in modern Florida’s history.

Having personally witnessed Florida’s rise from a predominantly rural Southern backwater to an economic and political juggernaut, Graham created the Bob Graham Center for Public Service at the University of Florida to continue his legacy of leadership and to train the next generation of Sunshine State leaders.

Bob Graham was raised on a cattle and dairy farm in the deep Everglades of what is now Miami-Dade County. He was literally born into Florida politics on November 9, 1936, just a week after his father, Ernest “Cap” Graham, was elected to the Florida Senate as an anti-corruption reformist.

Senator Graham grew up driving tractors, loading manure and raising livestock on a coral-rock homestead located deep within what at the time was a hot, disease-ridden swamp. During heavy rains and hurricanes, the family’s house would sometimes flood, forcing them upstairs to avoid the poisonous snakes and other animals that invaded the property.

Graham was a standout student, winning the title of Dade County’s “Best All-Around Boy” from the Miami Herald and serving as president of Miami High’s student body. At the University of Florida, he was involved in many different clubs and organizations and served as chancellor of the student honor court and president of his fraternity. A political science major, he also won some of the school’s most prestigious awards. He was inducted into the University of Florida Hall of Fame (the most prestigious honor at UF) and was a member of the exclusive Florida Blue Key.

After graduating from Harvard Law School, Graham returned to his native Miami Lakes and won a seat in the Florida House of Representatives as part of a group of young progressive Democrats sympathetic to civil rights, public education and the environment. The group was known as the Doghouse Democrats, because their liberal credentials often landed them in the doghouse with the conservative Democrats who controlled the state.

From the Governor’s Mansion to the Senate

In 1978, Graham launched a bid to become Florida’s governor. Still a little-known politician, Graham also faced the hard reality that no South Florida candidate had ever made it to the governor’s mansion. Most pundits thought he was simply deluded for even trying. But Bob Graham ran an exhaustive, state-wide campaign that began his signature “workdays.” Though the concept was simple and had been tried before, it had  never been done as Graham did it. He didn’t just show up to give a speech and follow someone around their factory for an hour: Bob Graham trained for the job beforehand and then put in a full day doing it.

After serving two terms as governor, Graham joined the U.S. Senate in 1987, carving out a career known not only for his grasp of domestic issues like Everglades restoration, immigration and off-shore drilling, but as a leading expert on foreign policy and intelligence. He was a frequent guest on Sunday morning news programs like “Meet the Press” and in 2002 he appeared on the Sunday shows more than any other politician.

Profiling Graham in The Washington Post in 2003, reporter Michael Grunwald wrote, “Today, Graham is one of the most popular politicians in Florida history. He’s known as a successful governor, an excellent consensus-builder, an unusually nice man for a politician. He’s never lost an election. He’s never been embroiled in a scandal. He’s enjoyed support from environmentalists and sugar barons, Cubans and Jews, retirees and college students. Michael Dukakis, Bill Clinton and Al Gore all considered him as a running mate.

One of Graham’s most important contributions came during his last term, when he was  named chairman on the Senate Select Committee on Intelligence. He co-sponsored  the bill to create the Director of National Intelligence position and co-chaired the Joint  Inquiry into Intelligence Community Activities Before and After the Terrorist Attacks  on September 11, 2001. Graham later authored 2004’s Intelligence Matters,  revealing serious faults in the U.S. national security system.

After retiring from public life, Senator Graham served for a year as a senior fellow at the Harvard Kennedy School of Government. During that year, he began developing plans for a center modeled on the Kennedy School’s Institute of Politics to be located at the University of Florida. The Bob Graham Center for Public Service opened in 2008 and is housed in Pugh Hall.

Though retired from elected office, he has stayed actively engaged in civic life. In May of 2010, Senator Graham was appointed by President Obama to serve as Co-Chair of the National Commission on the BP Deepwater Horizon Oil Spill and Offshore Drilling.  This followed his service as a Commissioner on the Financial Crisis Inquiry Commission and as the Chairman of the Commission on the Prevention of Weapons of Mass Destruction Proliferation and Terrorism.

Senator Graham is also the author of numerous op-eds and has written two additional books, America: The Owner’s Manual, which teaches the skills of civic participation, and Keys to the Kingdom, a novel of suspense which draws upon his background in government and intelligence.

In 2019 he moved from south Florida to the Gainesville area and maintains a part-time schedule at the Graham Center.